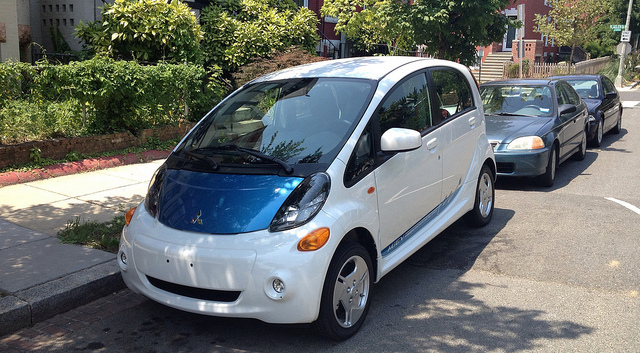 It must be canceling season in Japan right now. First we found out the shocking news that Honda is withdrawing from Formula 1 at the end of 2021. Now, it’s the turn of the Mitsubishi i-MiEV electric vehicle. Nikkei reports that the automaker is calling time on this diminutive battery EV this year, quoting an unnamed executive as saying, “we didn’t have enough money and personnel to continue investing in EV development.”

Unlike the Honda news, the only real surprise here is that the i-MiEV was even still in production. Mitsubishi has only managed to sell 32,000 of them since 2009, and here in the US sales of the i-MiEV ended in 2017.

As it happens, the i-MiEV was the first car I reviewed for Ars Technica, way back in July 2011. The specs were hardly earth-shattering—a 50kW (66hp) electric motor and 16kWh of lithium-ion battery storage, and a range of just 70 miles (112km), which should put all the complaints about the e-tron range into some context. It wasn’t particularly cheap, either: the i-MiEV we tested clocked in at $31,125. (That’s $35,935 in 2020 money.)

I’ll be honest—it was not particularly good. For one thing, you were paying for then-new technology, not the car it came wrapped up in:

The i-MiEV’s roots are a cheap and cheerful city car. If it came with a three cylinder petrol engine, you wouldn’t expect to pay more than $10,000 for it. Consequently, the fit and fittings really are quite basic. The model we tested was the SE spec, so it came with a hard drive-based navigation system, reversing camera, USB port, and Bluetooth, as well as a leather steering wheel and shift lever. Otherwise the cabin is rather spartan, the plastics are hard and shiny, and the seats are rather basic.

That range estimate was also a bit optimistic:

The i-MiEV draws power from an 88 cell, 330V, 16 kWh Li-ion battery. Mitsubishi says it should have a range of 70+ miles, but this cuts almost in half if you run the air conditioning (and in July in Washington, DC, you most certainly have to do that) or the heater. Driving at night with both AC and headlights seemed to deplete the battery even faster, but in two days and 30-odd miles I still only used two-thirds of a charge.

My abiding memory of the i-MiEV remains practically understeering into a wall when exiting DC’s Third Street Tunnel onto South Capitol Street at a not-very-fast 40mph, thanks to those narrow front tires. So long, little car.