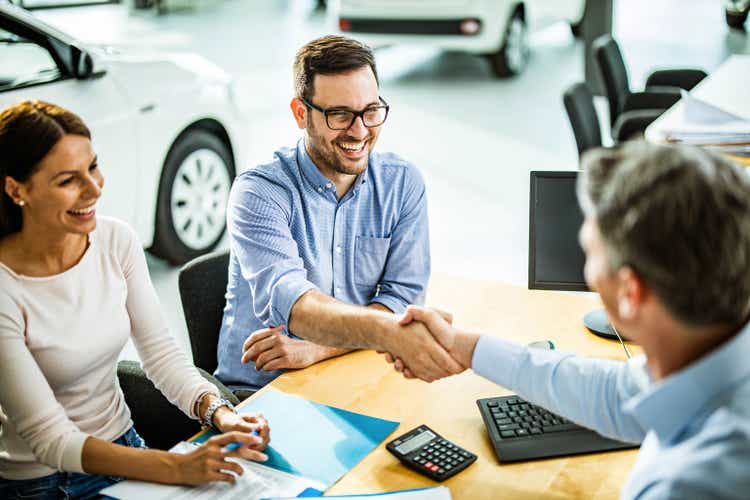 CarGurus (NASDAQ:CARG) has given back most of the gains it made after reporting a terrific fourth quarter a couple of months ago. There really has not been much in the form of news about the company, so the most likely reason could simply be stock market weakness. We think that shares are now trading at very attractive levels, and investors that missed buying before the blowout quarter can buy them now at similar prices.

The star of the quarter was their recently acquired subsidiary specialized in car auctions, CarOffer. In the fourth quarter, CarOffer generated revenue of approximately 179 million, growing over 1,000% since the acquisition closed in Q1. It not only became a profitable business, but also grew adjusted EBITDA to 33 million in Q4.

The original listings business continues to perform relatively well, given the headwinds that dealerships have been experiencing, ending the quarter with 30630 paying dealers globally and remaining relatively flat year over year. The international business had a similarly positive year, ending the year with 6,770 paying dealers. Canada became profitable this year and the UK continued to exceed our expectations.

It is interesting to see how the business is transforming itself from a listings business to a transaction marketplace. Now they enable consumers to not only shop for a vehicle on the site, but to trade in their existing vehicle as well. The combination of CarOffer and CarGurus provided the basis to launch Instant Max cash offer. With Instant Max consumers can now sell their vehicle digitally from the comfort of their home and can be assured that they will be presented the highest available offer from the thousands of dealerships in the platform. Instant Max saw tremendous growth with transaction volumes growing over 1,300% quarter-over-quarter.

There are more things to like about CarGurus, such as its platform being nearly three times as likely to be the final auto shopping site visited before purchase. This shows good product-market fit, and that consumers are finding what they are looking for. Another sign of good product-market fit is the high rating CarGurus’ app has, with 4.6 stars our of 5 on the Google Play Store and 4.8 stars on the Apple App Store.

Despite all these positives, the company is trading well below its peak valuation, and currently sports a market cap of ~$3.6 billion.

Thanks to CarOffer revenue has been exploding higher, with growth rates exceeding 100%. It is important to note, however, that this revenue comes with much lower margins compared to the original listings business.

The impact of CarOffer on margins can clearly be seen in the graph below, dragging down both the gross profit and operating margins. Still, operating margins remain above the historical average for the company, solidly in positive territory.

What has been a little disappointing is the lack of significant growth in the number of paying dealers for its listings business. We expected at least the international count to be growing much faster. This is something investors in the company should monitor closely.

There has at least been some moderate growth in the average amount paid per dealer. The quarterly average revenue per subscribing dealer (QARSD) is shown below, and as can be seen it has been growing but not very quickly.

Contrast that growth to that of CarOffer, which has shown explosive growth in revenue, enrolled dealer rooftops, gross merchandise sales on its platform, etc. This is why CarOffer is quickly becoming the main growth engine for the company and will increasingly represent more of its value.

So how much are you being asked to pay for this business that combines a low-growth, but very profitable listings business, with a booming car auction marketplace? Turns out, not that much. The company is trading with an EV/Revenues ratio of ~4.1x, and a forward EV/Revenues of only 2x. This is cheap even when considering that CarOffer has low margins.

When looking at the consolidated business we can see that it is growing nicely at a ~37% revenue growth CAGR.

Based on the trailing twelve months P/E ratio, shares might look a little expensive at 37x, but earnings are expected to grow quickly, and in fact the forward P/E ratio is down to only 22x.

Going into more detail, we can see that the international operations are still posting losses, but they are quickly approaching break-even. We can also see that consolidated GAAP operating income has been growing nicely the last four years.

Looking forward we can see that by fiscal year 2024 analysts are expecting $1.98 earnings per share, making the FY24 P/E ratio a very cheap 17.5x.

We see a few risks with the company, one is that website traffic seems to have been recently declining. The Alexa rank of the company has gone down 507 places, from being the #1,513 most popular website in the world to now the #2,020.

Similarly, we see that some engagement metrics are down, such as daily page views per visitor, time on site, and bounce rate have all deteriorated.