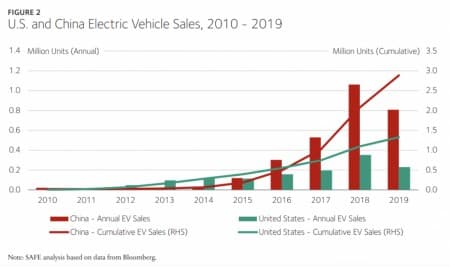 A bipartisan, federal response is required for the United States to compete with China’s ownership of the next generation of transportation, according to a new report from Securing America’s Future Energy (SAFE).

By 2040, Bloomberg New Energy Finance (BNEF) foresees the global stock reaching 500 million EVs. Even the Organization of the Petroleum Exporting Countries (OPEC) foresees roughly 320 million EVs on the road
by 2040.

Across the industry, automakers will invest $300 billion over the next five to 10 years on EV development and production. Nearly half of this
investment spending will occur in China, SAFE reports.

China has set a target for NEVs to account for a fifth of overall car and truck sales by 2025, compared with the current level below 5%.

The EV industry is a pillar of the ruling communist party’s controversial Made in China 2025 program aimed to dominate hi-tech fields globally.

“We must assess the clear security concerns inherent in Chinese ownership of our transportation future. We have a brief window to mobilize our considerable resources to build a robust transportation sector free from Chinese control,” says Gen. James T. Conway (Ret.), Co-Chair of the Energy Security Leadership Council, SAFE.

“If we miss that window, we risk jeopardizing our auto and truck industry and the 10 million U.S. jobs the auto industry supports. We also risk a future driven by Chinese technology and the policy decisions of our largest strategic rival in the 21st century.”

China controls 70% of the world’s lithium supply, 61% of the cathodes, and 83% of the anodes used in batteries. It also controls 80% of the rare earths supply needed for US weapons systems and EVs.

According to Benchmark Intelligence, in May 2020, 107 of the 142 lithium-ion battery mega factories under construction worldwide were located in China. Just nine are planned for the United States. 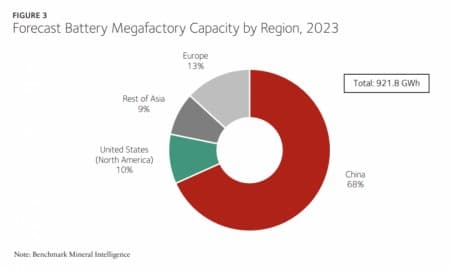 “For decades, the U.S. economy and American national security has suffered from our nation’s dependence on an oil market controlled by countries that do not share our strategic priorities. The transition to electric, connected vehicles provides our country with an opportunity to finally create a transportation system that works in our own national interest. But if we do not lead this shift, we instead risk becoming dependent on China for our future transportation needs,” said Admiral Dennis Blair (Ret.), former Director of National Intelligence and Commander-in-Chief, U.S. Pacific Command, and Chairman of SAFE.

To support the US EV industry, SAFE recommends reforming the federal tax credit for electric vehicles and expanding a tax credit for medium and heavy-duty EVs.

The report also highlights the importance of developing a critical minerals supply chain that is not controlled by China and advancing next-generation transportation technology.

Google was one of the first notable companies to begin developing autonomous vehicles (AVs) in the late 2000s, but many AV technology companies in the United States have been hampered by the lack of a comprehensive federal policy and regulatory framework. Today, most of China’s largest technology corporations are developing AV technology, with significant investment and state support.

“To compete with Chinese companies, allowances for deploying novel design autonomous vehicles (AVs) on public roads must be expanded from 2,500 to 100,000 per manufacturer as long as they are as safe as current vehicles,” says SAFE.

“To truly compete against China’s ownership of these critical supply chains and new technology, we need to rehabilitate and transform our entire industrial ecosystem from minerals to markets,” said SAFE President and CEO Robbie Diamond.

Read this article on OilPrice.com

This story originally appeared on Oilprice.com