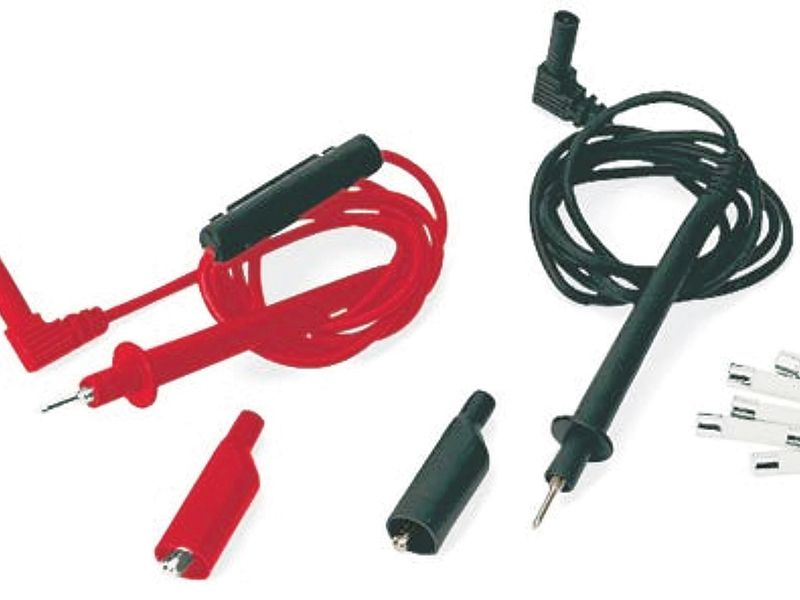 A second preventive step is encouraging techs to use a fused test lead. As its name suggests, this test lead contains a fuse holder with a replaceable fuse.

Suppose a careless tech subjects the meter to excessive current. If so, the condition blows the fuse on the test lead, leaving the OEM fuse inside the meter intact.

Remember that measuring current (amps) with a traditional meter requires disconnecting wires in order to place the meter “in series” within the circuit of interest. Or, it means connecting the meter to a fuse panel with a special adapter.

Third, consider upgrading to an inductive current-measurement device, such as a clamp meter. Two examples of popular automotive-specific clamp meters appear in the accompanying photographs.

One of these tools comes from Electronic Specialties Inc.; the other comes from Snap-on.

Inductive devices such as clamp meters feature spring-loaded jaws. The user squeezes open the jaws and slips them around the wire being tested. A sensor inside those jaws monitors the volume of current flowing through the wire.

This inductive measurement method has been a staple of automotive diagnosis for years. (I first used it on cars back in the late 1970s.)

One giant advantage of the inductive technique is that it saves the time and trouble involved in disconnecting wires or tapping into a fuse panel.

Another major feature of inductive amps measurement is that it eliminates the risk of blown fuses in meters.

What’s more, the latest automotive clamp meters feature exceptional sensitivity. For example, the models shown here measure current values effectively down in the milliamp range. (A milliamp, abbreviated as mA, is one-thousandth of an ampere.)

Meanwhile, the clamp meter’s combination of slip-around jaws and milliamp sensitivity is especially timely today for troubleshooting battery drain problems. These conditions occur when a component remains on after the driver leaves the vehicle.

Then the “live” component discharges the battery.

My field experience has been that battery drains have become fairly common conditions on modern vehicles.

To me, an appropriate automotive clamp meter is a universal battery drain tester, whose jaw openings are large enough to slip around a common battery cable.

A tech can park a problem vehicle and work on other repair jobs. After a period of time, on-board electronic components are supposed to shut off.

Simply slipping a clamp meter’s jaws around one of the battery cables enables a tech to measure battery drain quickly and accurately.

An excessive milliamp reading here confirms that something inside that car has not shut itself off. This job requires additional diagnostic time.

A reasonable rule of thumb is that this reading should be approximately 50 milliamps or less. Typically, the battery drain measurement on a healthy vehicle is closer to zero.

Meanwhile, the reading on a problem vehicle tends to be substantially greater than the 50-milliamp guideline.

Bottom line: The inductive current-measurement method is a practical complement to traditional digital meters in any service department.