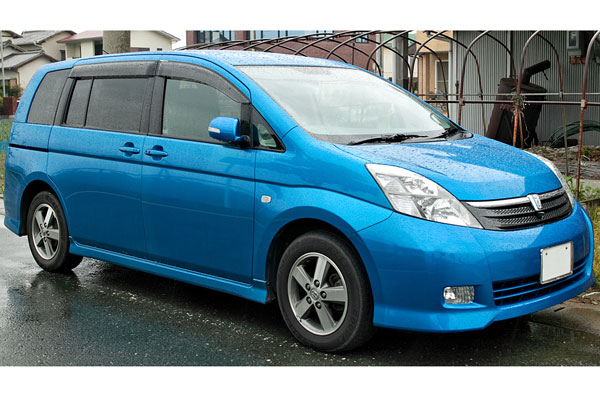 The Toyota Isis was launched in September 2004, features sliding doors and is available with either front or four-wheel drive and straight-4 1.8 and 2.0-litre gasoline engines. When you look at the Isis from a distance, you would mistake it to for a Toyota Voxy, only with lower ground clearance.

Siraj Rukundo, a motorist who has had the Toyota Isis 2007 model for approximately three months, describes the Isis as a seven seater mini-van with two extra seats at the rear. This, according to Rukundo, makes the car user friendly because the rear seats can be folded or adjusted to create space for carrying luggage.

Interior of an Isis

Engine size
Compared to other cars such as the Toyota Corolla Fielder that Rukundo had previously, the Isis is stronger because of its 1800cc engine size.

“Yes the Fielder’s fuel consumption is friendly but the Isis is heavy and stable on the road compared to the Fielder. Even when you load the Isis, you still feel the driving comfort and stability at high speeds,” Rukundo adds.
Exterior
According to Rukundo, the Toyota Isis looks a little bit ordinary. He says it is less electrical and that his is a two-wheel drive car that pulls from the front wheels, much as there are those that are 4WD.

“I use it as a business car to carry confectionery and any other merchandise that is light or not more than 2,000 kilogrammes. When I drive upcountry, the trunk gives me ample space to carry more foodstuff when I adjust the rear seats,” Rukundo says.

“Its ground clearance is also similar to that of a Toyota Premio. I am able to drive on rough roads, especially upcountry without worrying about the lower parts of the car getting damaged,” he adds.
Service

Rukundo has been to the garage twice. The first time was when he had just bought the car and spent Shs80,000 to have it inspected for road worthiness, and the second time was to carry out general car service where he spent approximately Shs120,000.

According to sbtjapan.com, the Isis model derives its specifications from the Toyota Wish, Noah and Ipsum. The portal says the very first variant of the Toyota Isis was fitted with the 1.8 litres of diesel engine and mated with high performing specs such as the two-litre direct injection system, automatic transmission and dimensions that measures conveniently around 4640 mm, 1710 mm and 1670 mm for the length, width and height respectively.