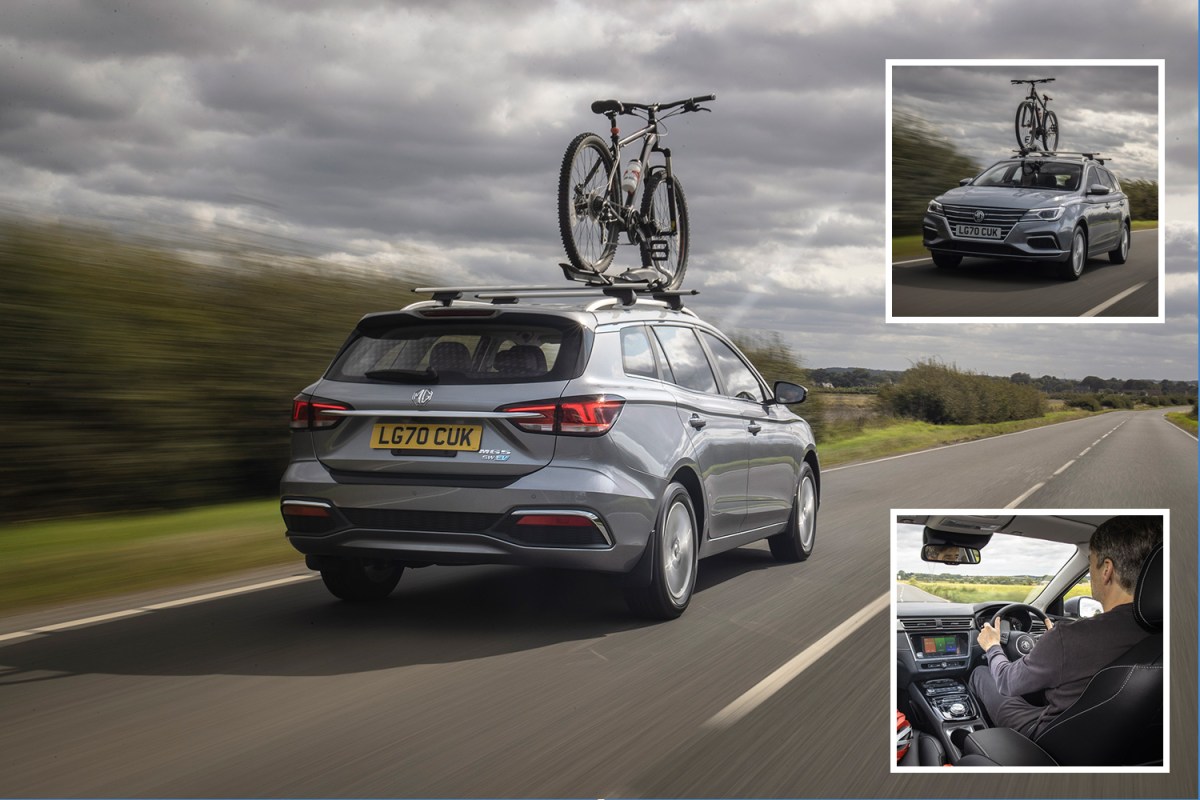 SOME car firms are obsessed with giving us things nobody ever asked for.

Sorry, mate. If you can’t park, you shouldn’t be driving. It’s part of the test.

Then there’s all these ­virtual assistants that can boil the kettle before you shut the garage door.

Except they don’t work, of course. They’re worse than useless.

So fair play to MG for giving us something we might actually want: A practical family wagon with minuscule running costs.

MG has beaten all the big guns by launching the first all-electric estate car — and crucially, it combines a big boot with decent range at an affordable price. I like it.

We’ll come to charge times and looks in a bit.

That’s a capital B bargain.

Especially when you consider the cheapest Nissan Leaf is £26,845 and doesn’t go as far.

Plus it has a seven-year warranty.

And you’ll save a fortune on fuel.

EVs cost around 3p a mile in electricity compared to 12p a mile for a petrol car.

Road tax is free (for now) and maintenance costs are lower because there are no oily bits.

I lived with this car for a week and it was as comfy as an old pair of joggers.

It’s got Apple CarPlay, too, the only bit of tech I’d want in a modern car.

There are three levels of regenerative braking, adjusted by the KERS button on the centre console, and in the harshest setting you will hardly ever need to touch the brakes.

In a hurry? You can find yourself going very fast, very quickly.

Electric cars have lots of silent oomph and the MG5 can sprint from 0-30mph in 3.2 seconds.

The official 214-mile range is achievable, definitely around town, but you should know that batteries hate cold weather as much as we do.

So you’ll need to recharge more often in winter.

Now we come to the Achilles heel of all electric cars: Charge time.

It takes eight hours 30 minutes for a full charge from a home wallbox and 50 minutes for 80 per cent juice at a public rapid charger.

MG expects more than half of its sales to be electrified from next year.

As well as the pure electric MG5 estate and ZS crossover, the HS plug-in hybrid is about to hit dealers.

UK boss Daniel Gregorious said: “We will reach the tipping point next year – years ahead of the market.

“We are the go-to brand for mainstream electric cars.

Sales are up a third this year despite lockdown and will top 20,000 for the first time in many years.

MG is owned by Chinese giant SAIC Motor and has access to all sorts of battery tech and body shapes. Let’s hope there’s an electric sports car in the oven.

But if you can live with that, you’re golden.

The charge port is hidden behind that iconic MG octagon on its nose.

Boot space is 578 litres, which is big enough for all the usual family debris, and extends to 1,456 litres with the rear seats down.

Even better, fit a roof rack and all you active, outdoorsy people can head to the green bits of Britain just as you would with any estate car.

STRIFE IN THE FAST LANE

How much are speeding fines in the UK?

Is it illegal for someone to park on your driveway or in front of your home?

ONE WAY OR ANOTHER

It’s just that this one doesn’t stain the lungs of baby hedgehogs.

Finally, looks. It’s not going to increase your strike rate on Tinder, put it that way. Or maybe it will?

This is a car for sensible people who value price, practicality and being a good global citizen above stupid gadgets.