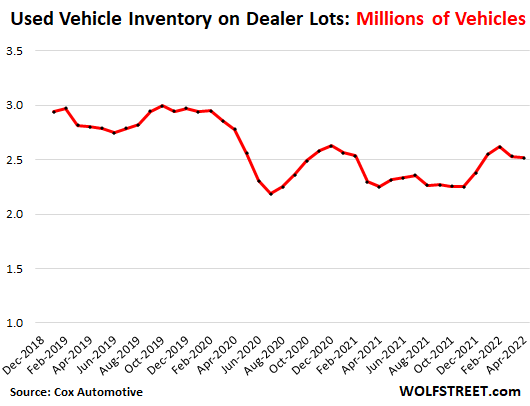 By Wolf Richter for WOLF STREET.

Used-vehicle wholesale prices suddenly rose again by mid-May, after falling three months in a row, seasonally adjusted, with the underlying dynamics firming up in May as well, according to the mid-month update by Manheim, the largest used-vehicle auction house in the US. And prices might rise further in the second half of May, according to underlying auction dynamics.

Which is quite a plot twist for the story of the unwinding price spike. The underling price dynamics had started to weaken in November and weakened further in December. In January wholesale prices were flat for the first time since August seasonally adjusted, and then fell in February, fell again in March, and fell again in April.

But it looks like the price declines have fizzled for now, unwinding only a small-ish part of the ridiculous spike that had started in June 2020.

Average listing prices of used vehicles on dealer lots rose by 4.1% in April from March, after three months of declines, in line with seasonality, and was up 26% year-over-year, according to Cox Automotive, based on its Dealertrack data last Thursday. The year-over-year spike had peaked at 28% late last year and early this year.

The average listing price of $28,365 was a new record. This is an indication where retail prices in May and June could be heading and doesn’t look like much of a cooling process either: 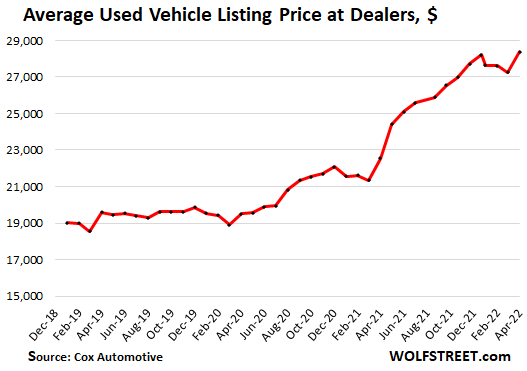 The number of used vehicles on dealer lots at the end of April, at 2.52 million vehicles, has been in the same range over the past four months, and was up 12% from a year ago, according to estimates by Cox Automotive released on Thursday.

This is plenty of inventory for the number of vehicles sold: Given the vehicles in inventory, and the plunge in vehicle sales, days’ supply at the end of April rose to 48 days. In the old-normal times of the year 2019, supply averaged 48 days.

But there are still enough sales, and inventories are tight enough, and dealers have bought these vehicles at high prices, and now are reluctant to cut prices to boost sales.

Plunge in sales despite surge in tax refunds.

Tax refunds are crucial for the car business this time of the year. They make perfect down payments. Through April 29, the IRS issued $279 billion in refunds, up by 19.6% from the same period last year, with 97% direct-deposited into the taxpayers’ bank account, and so they already got this money, according to IRS data. The number of refunds issued rose 16.4% from a year ago, to 87.2 million refunds. The average refund amount rose by 5.7%, to $3,102.

So more refunds, and larger refunds on average. And that should have translated into more used-vehicle sales. But it didn’t.

Used vehicle sales plunged 19% year-over-year, despite the higher tax refunds. Why? Because prices were too high, and potential buyers had had it, though there is plenty of inventory. And if anything, the boost in tax refunds supported those ridiculous prices.

Enjoy reading WOLF STREET and want to support it? Using ad blockers – I totally get why – but want to support the site? You can donate. I appreciate it immensely. Click on the beer and iced-tea mug to find out how:

Would you like to be notified via email when WOLF STREET publishes a new article? Sign up here.