When I think of the Salvation Army, I think of bargain hunting in thrift stores and trucks being summoned to homes to pick up donations of furniture, clothing and household goods to sell in the stores.

But here in Nashville, due to a confluence of challenging circumstances, both of those Salvation Army scenarios are a thing of the past.

The one remaining Salvation Army family thrift store in Nashville is closed, and the trucks have turned their attention from making donation pickups to delivering food and other items to people in need.

Maj. Ethan Frizzell, who heads the Salvation Army operations in Middle Tennessee, said the current pressures on retail, increased lease rates and COVID-19 complications converged to cause a deficit in the Madison store’s balance sheet, and ultimately the end of the Salvation Army’s retail operation here. 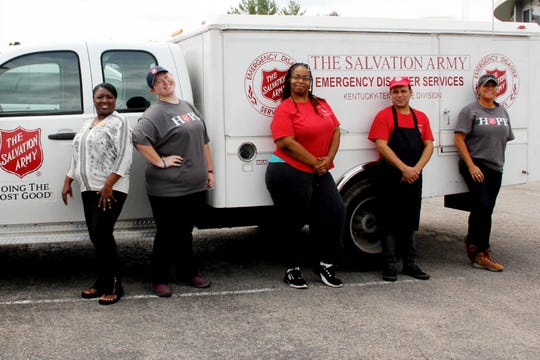 April Calvin, left, Tiffany Ladd, Ulonga Lott, Adel Gisele and Angela Simms are part of the Salvation Army team that provides more than 400 meals every day at four locations in Nashville. The daily meals have been going out since the tornado in March. (Photo: Submitted Photo)

He said the mission of the thrift store was to make money to support the Salvation Army’s programs but also to provide a “dignified way” for people to get things they need as they get back on their feet.

“Ideally the store would do both,” he said. “And even when the store didn’t make money, we thought that if we could break even and still be able to help people” by offering them vouchers for store purchases, “it would be worth our while. It would be a loss but a social gain.”

“You don’t want to be your best customer,” Frizzell said. “The lease was up, and with us being a nonprofit in this age of uncertainty, we could not continue with the risk.”

The Salvation Army has had a presence in Nashville for more than 130 years, and there had been a thrift store with its familiar shield for 70 years — until the 2010 flood destroyed property and shut down the retail operations.

The 2010 floodwaters trashed the Salvation Army’s North First Street facilities, not only destroying the Adult Rehabilitation Center and requiring most of its 80 residents to be evacuated by emergency boats (the water reached well into the second floor), but also ravaging the large thrift store and the warehouse where all the donated merchandise was stored.

At that time the Salvation Army had stores on North First Street, Charlotte Pike, Gallatin Pike and Nolensville Road. The stores’ profits supported the organization’s addiction rehabilitation program, which now operates out of the Memphis Salvation Army division.

The flood also wiped out the entire fleet of Salvation Army trucks that picked up and delivered donations, making it difficult to provide inventory to operate the other stores. 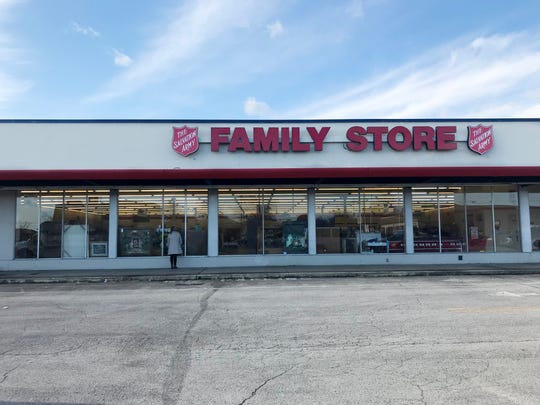 By 2011, the stores all closed, and the Salvation Army was completely out of the retail business in Nashville.

Five years later, it started operating truck pickups and opened the Madison store on Gallatin Pike as a fresh retail start, hopeful it could eventually add more thrift stores and build back up.

But Frizzell said that after a five-year run, and particularly this year with the tornado and COVID-19 issues, the store’s numbers did not support continuing in business.

What Salvation Army is doing in Nashville now

“The Salvation Army exists to meet human need wherever, whenever, and however we can,” according to the organization’s mission statement.

As Middle Tennessee faces COVID-19 and other concerns,  Frizzell said his organization has redoubled its efforts to help families and children and homeless people.

Programs include disaster relief and emergency assistance, including short-term help with rent and mortgages, food, housing and utilities.

The Salvation Army not only provides food boxes to people in need, but it also serves more than 400 meals every day to residents of its Center of Hope on Dickerson Road, and through its roving canteens, which take food out to several homeless camps daily.

Frizzell said the Salvation Army’s “supportive housing” program is working to move people from homelessness to housing in 60 days, with the ultimate goal being self-sufficiency.

The pods are designed to provide tutoring, technology, family guidance, food and other resources to children and families. Frizzell said the Salvation Army programs also encourage people to take advantage of life skills and employability classes.

“We call it resourcing hope,” he said.

The Salvation Army also provides holiday assistance to families through its Angel Tree initiative, which has been streamlined to help needy families connect with generous resources in the community. In recent years, the Christmas program has provided for 7,000 children and 700 older adults in five Midstate counties.

Seventy percent of the Salvation Army funding comes from individual and corporate donors, with the remaining 30% from government funding and grants. The holiday bell ringing is a trademark fundraiser, and Frizzell said this year there will be a new “Red Kettle Challenge” designed to increase the campaign.

“We are asking everyone to be bell ringers,” he said, explaining that family Red Kettles will be passed out to encourage families and community groups to pull together with their collections and donations.

Reach Ms. Cheap at 615-259-8282 or [email protected] Follow her on Facebook at facebook.com/mscheap, and at Tennessean.com/mscheap, and on Twitter @Ms_Cheap, and catch her every Thursday at 11 a.m. on WTVF-Channel 5’s “Talk of the Town.”