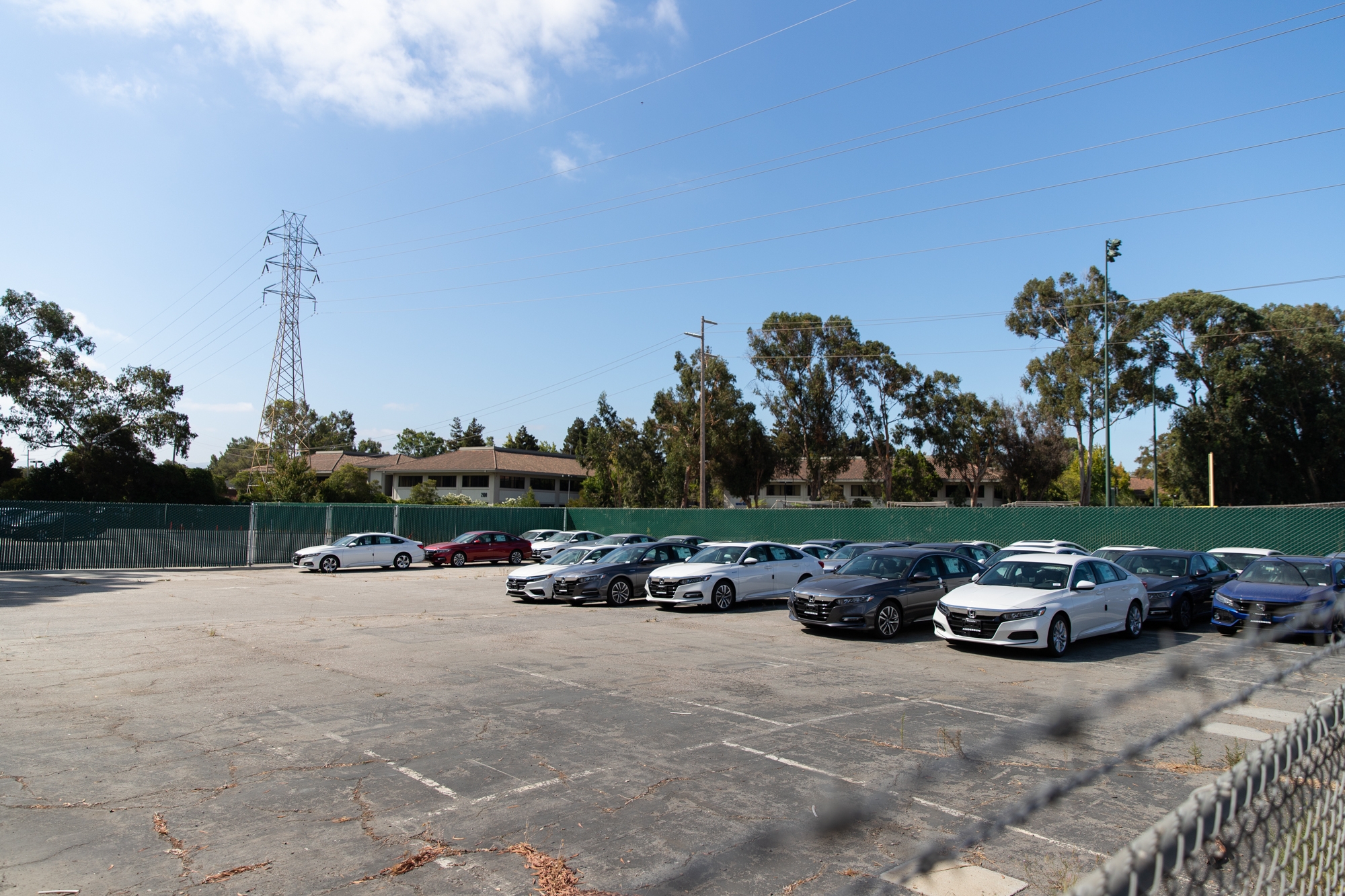 When Move Mountain View launched its “safe lots” program in 2018, it faced a daunting but critical mission: provide temporary shelter to the growing population of vehicle dwellers parked on city streets at two church parking lots and help these individuals obtain permanent housing.

Then the COVID-19 pandemic hit and the program both expanded and adjusted its mission. It added two large new Mountain View lots: one at Shoreline Amphitheater that can accommodate 30 vehicles and another at a former Santa Clara Valley Transportation Authority site on East Evelyn Avenue and Pioneer Way with room for about 29 vehicles. Its lots became shelter-in-place havens for their inhabitants, with monthly testing for the virus, a food program that serves meals to residents and monthly visits from a medical team, said Amber Stime, the nonprofit’s executive director.

Its five lots accommodate about 132 individuals, Simes said. So far, all of them have been free of COVID-19.

The nonprofit, which was founded in 2016, is continuing to grow, both within and outside its home Mountain View lots. It is also opening up another lot on Terra Bella Avenue, not far from North Shoreline Boulevard, which has enough space for eight to 10 vehicles, Stime said. It is also looking beyond the Mountain View border and into Palo Alto, where it plans to open a similar lot at 2000 Geng Road, next to the Baylands Athletic Center.

For the Palo Alto City Council, which has been discussing ways to encourage safe-parking sites for more than a year, the Geng Road site would be the first such program in the city. On Monday, Sept. 14, the council will consider an agreement with Santa Clara County that would allow the city to lease the land to the county for three years. The county, which currently partners with Move Mountain View at the nonprofit’s existing lots, would establish a similar agreement with Palo Alto.

For Palo Alto, the decision to focus on the Baylands site represents an abrupt change of direction. While the council has been exploring a “safe parking” program for the past year, the city was primarily focusing on small programs at local congregations, with each accommodating up to four vehicles.

The effort to establish safe-parking programs like the ones in Mountain View and East Palo Alto gained some momentum since June 2019, when Vice Mayor Tom DuBois and Councilwoman Lydia Kou issued a memo advocating for exploring new services to accommodate the growing number of vehicle dwellers.

“RVs and other vehicles can be found on main thoroughfares and quiet residential streets for extended period of time,” the memo stated. “The City must address this matter from a health and safety standpoint.”

Earlier this year, the council approved a permit process for what it called the “Tier One” safe-parking program, with the understanding that Tier Two would focus on privately owned commercial sites and Tier Three on city-owned land. The council voted to approve the rules governing the first tier, including a requirement that the program be limited to overnight parking.

The COVID-19 pandemic has upended that strategy and ushered in a new era of financial challenges and shelter-in-place orders, which forced churches to close their doors. A new report from the Planning and Development Services Department notes that because of limited resources and the challenges of responding to the pandemic, no congregations have been able to launch safe-parking programs.

Rob Schulze, pastor at the Peninsula Bible Church, said that while his congregation was planning to move ahead with a safe-parking program, the pandemic forced it to shift its priorities. This includes completing construction of the church’s commercial kitchen, which allows it to increase its charitable feeding program. New shelter-in-place rules, which require most people to work from home, added another challenge, given the location-specific nature of parking programs.

“With COVID-19, we’ve redirected all of our energies to food, delivery and care for the community in other ways,” Schulze said. “Safe parking has been on the back burner until we can be on campus on a more regular seven-days-a-week basis.”

Despite the setback, the church still plans to move ahead with safe parking, he said. A church committee is exploring the issue, he said, with the hope of getting a permit for such a program in the coming months.

“As far as safe parking, we recognize that our unhoused vehicle residents have increased in numbers in our broader area, which is partly why we want to formalize an agreement with the city,” Schulze said.

But while the prospect of congregation-led programs has temporarily dimmed in Palo Alto, the city has found a willing partner at the county level. Santa Clara County Supervisor Joe Simitian, who has been a champion of safe-parking programs, has led the county effort to support the programs by allocating $750,000 for such programs in January and by looking for opportunities to lease land to operate the programs.

In April, Simitian announced the county’s agreement with Live Nation Entertainment to allow the use of a Shoreline lot year-round for safe parking. The former VTA lot, which is now owned by Alta Housing, would also provide 24/7 parking for vehicle dwellers. He noted that unhoused residents are “among the most vulnerable to infection during the COVID-19 crisis.”

“While not a long-term solution, safe parking allows residents to have stability in where they sleep each night while they seek permanent housing,” said Simitian, whose office worked with city and business leaders in Mountain View and Palo Alto to identify potential sites. “This stability is critically important, now more than ever,” Simitian said in a statement at the time.

If approved by the council, Palo Alto’s first safe-parking program would be similar to ones in Mountain View, with lot monitors who make sure all the sites are safe, that all parking rules are being followed and that none of the vehicles are leaking gas, Stime said. The Geng Road site will accommodate up to 12 vehicles. Unlike the church program, which was limited to overnight parking, the Geng Road site will provide 24/7 parking.

The space will also come with services. The nonprofit would work with partners, much as it does in Mountain View, to provide case management for each participant, with the goal of finding permanent housing. To date, Move Mountain View has been working with the nonprofit Community Services Agency to provide the aid, though it is also planning to hire two case workers.

Move Mountain View is also working with school districts to make sure that the children who live on the lots have internet access, Stime said.

Housing, though, remains the main goal. Stime said that the program had about 20 vehicles in its first year and that it was able to find housing for half of the population. This, she notes, doesn’t always mean finding public housing or helping someone lease an apartment. At times, it means evaluating other options, such as living with family members and helping to offset the rent.

The Palo Alto site offers some inherent advantages. It is fenced off from the surrounding commercial area and it already includes structures with restrooms and showers, small garages and a building with three bedrooms and a bathroom — amenities that make it “an ideal location for safe parking,” according to the report from the Planning and Development Services Department.

While the site is currently vacant, the Palo Alto Fire Department recently used the Geng Road building as a temporary fire station while the city was rebuilding the station at Rinconada Park (the project was completed in March).

Stime said the existence of showers “is itself a gift.” The nonprofit will be looking for a way to allow shower use on a rotating basis and to make sure the facilities are completely clean and sanitized between users.

If the Palo Alto council approves the program, the nonprofit will visit locals living in their cars and inform them about the program, either by talking to them or by leaving a card on their vehicles. Stime believes the demand is there. All of its Mountain View lots are full and there are about seven vehicles on the waiting list, she said.

To date, she said, the programs have been well received, both by neighbors and by participants. Some residents have “high expectations and want more,” while most are happy to be grounded in one place and “not worrying from night to night where they will be parking and if they will be ticketed.” The nonprofit also made an effort in Mountain View to reach out to nearby businesses and inform them about the new program before it launched, which helped establish a “good neighbor” relationship, Stime said. It also asks the program’s clientele to be good neighbors, she said.

“Of course, people are fearful of what they don’t know and our imaginations are greater than what is real,” Stime said. “But overall, it has gone very smoothly. A majority of the people we have in parking lots are very grateful — especially during COVID, when all public bathrooms were shut off and you couldn’t go to McDonald’s to wash your hands. This has been a life saver.”