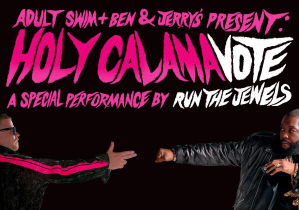 
Due to a health scare in their crew that temporarily halted production, the broadcast for RUN THE JEWELS’ televised concert special, “Holy Calamavote,” has been rescheduled for SATURDAY, OCTOBER 17th at MIDNIGHT ET/PT on ADULT SWIM. Although the crew member has been cleared of any COVID-19 diagnosis, the band have pushed back the airdate in order to ensure the strictest safety protocols.

The televised performance will include a slew of guests joining in the show’s call to action for viewers to participate in the upcoming election, including performances from MAVIS STAPLES, ZACK DE LA ROCHA and JOSH HOMME. ADULT SWIM comic ERIC ANDRE will act as the event’s official MC.

“Holy Calamavote” is yet another milestone for KILLER MIKE and EL-P, who make up the rap duo RUN THE JEWELS, as they enter the ranks of musicians with their own dedicated TV special. The telecast gives them the opportunity to present, commercial-free, the very first performance of their hit album “RTJ4” after its release earlier this year

In addition to the linear telecast, the performance will be simul-streamed on ADULT SWIM’s website. The show will also be made available on the network’s YOUTUBE channel immediately afterward, where fans will have the opportunity to donate to the ACLU. Hip ice cream manufacturers BEN & JERRY’S are also sponsoring the event.

Fans are encouraged to go here to get more information about the show and pledge to vote.

KILLER MIKE and EL-P are also featured on BOB LEFSETZ’s podcast this week on IHEART and others, where they talk about hip-hop, muscle cars, politics, how they met and more.

« back to Net News