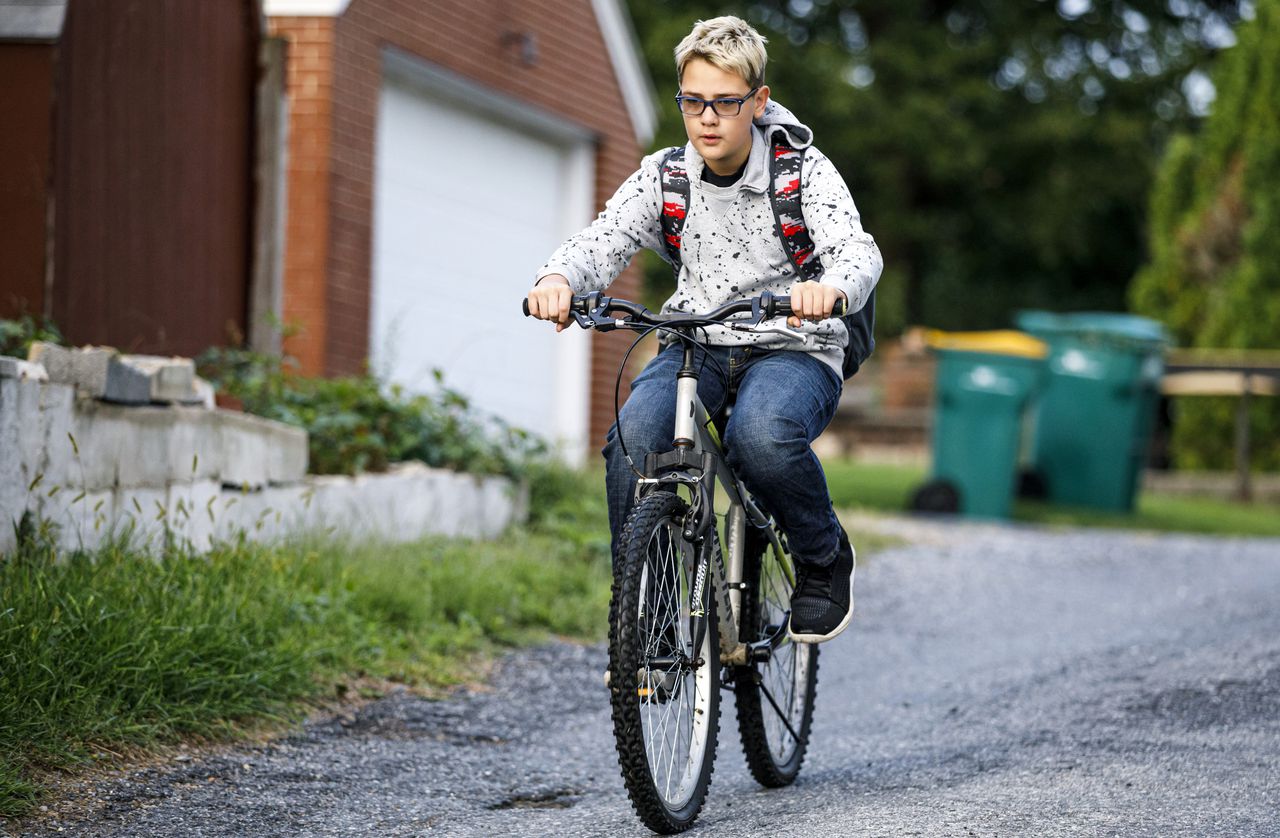 “Friday night would roll around, the homework was due and we would be sitting down with just tears and screaming — trying to get at least a 75%,” Snedeker said.

Starting this fall, Christian is going to school in-person two days a week, though Snedeker said she’s pushing for his school to teach him in-person all five days.

“I’m just worried about him falling behind. He struggles to learn already, and he is extremely smart, he just, he doesn’t have the attention and the drive to do it on his own,” she said.

Students with intellectual disabilities or special needs are disproportionally affected by virtual learning because they miss out on vital socializing, skill-building and emotional growth, experts say. Consistent routine, physical touch, hands-on learning — these are all motivators for many students with special needs that are seemingly impossible to replicate in the virtual classroom.

“Overall yes, students with disabilities are going to be affected more — but all students are being affected,” Holly Turner, community advocate for the ARC of Cumberland and Perry Counties (CPARC), said.

However, local school districts are working to find solutions through creativity and innovation. Educators are collaborating on how to teach students about social distancing and hand washing, while others are trying to make wearing a mask fun.

“This is a time where we need to look at it as an opportunity and to learn from what we’re seeing and take the good pieces from it and apply them moving forward,” Kirsten Scheurich, director of special education at Derry Township School District, said.

Sarah Kelly has an autistic first-grade son, Silas, in the Derry School District. She’s a registered nurse and said there’s a specific period of time in a young person’s life where their brain is developing. Not accessing vital socialization and therapies could impact them in the long-term.

“These kids, a lot of them are used to the routine,” Kelly said. “He didn’t understand why his teacher’s face was showing up on his iPad that he usually watches Netflix on.”

“Our number one goal is to keep our students and our staff safe,” Leonard said. “A very close second goal to that is staying open.”

Derry Township School District started the year with a hybrid instructional model and is allowing certain special education students to come into classes all five days of the week as well.

Federal and state law requires schools to work with students who have special needs or an intellectual disability through a 504 or Individualized Education Plan.

Scheurich said Derry Twp. looked at each student’s Individualized Education Plan to determine which students would come back to in-person classes first, which totaled around 25-30% of the 375 special education students in the district.

“There are some students, by nature of their needs, who we’re not able to fully implement that [Individualized Education Plan] unless they are physically with us, face to face, five days a week full day,” Scheurich said.

A 504 or an IEP can provide a student with accommodations, like audio testing instead of written testing, talk to text capabilities for online assignments, or extra reading and writing help.

Amanda Bible, of New Cumberland, said her eleven-year-old son had an IEP and goes to school in the West Shore School District. Her son doesn’t have a disability but does struggle with reading and writing. She said that she spent the summer working with him on school preparation workbooks to make sure he doesn’t fall behind.

“I definitely think it helped because, I held on to his papers that he didn’t do so well on and luckily I was able to reincorporate that too,” Bible said.

Her son also has had issues with his eyesight. Bible said she was limiting his screen time, but online classes made that difficult.

“I was trying to get away from screen time, games, TV and unfortunately it became … a necessity,” she said.

Most schools have reopened, either virtually or in-person, over the past few weeks, and Scheurich said students have exceeded her expectations.

“I think we have all expressed to each other that we are astounded by the resiliency of our students,” she said. “They came back and fell into routine so much more quickly than I think any of us gave them credit for. It was really quite impressive. The kids are so excited to see each other and to see their teachers, and just so happy to be back in school.”

She said some of the kids that are on the hybrid schedule said they wished they could be at school all five days in person.

“Which — that’s not typically something you hear kids say in any other year, ‘I want to be in school all the time,’ so I think it’s [helped] people to maybe appreciate education,” she said. “The kids themselves — outstanding. They’ve really done an outstanding job.”

Even the first day of school, which for most kids is a sad end to the summer, turned out to be a joyful reunion for many classmates.

She said she watched a second-grade boy with autism at Shaull Elementary jump out of his car and run towards his teacher who he hadn’t seen in six months. He had such a big smile, you could see it despite the mask on his face, Angelo said.

“Just the sheer joy of kids walking through the doors smiling, happy, waving, even with temperature checks and everything going on,” she said. “If we could just be as resilient as kids, what a world it would be.”

Some districts have said mask-wearing has gone much better than anticipated. Just as you teach a child with special needs to wear glasses for the first time, you can teach them to wear a face mask, Leonard said.

She said pairing mask-wearing with “highly motivating tasks,” like playing with legos or a board game has worked well.

“Some people like to watch tv when they’re working out because it distracts them — it’s the same kind of concept,” Leonard said.

In fact, masks have become a medium for teachers to exemplify certain life skills concepts in the classroom. In a typical year, students are taught how to ask for breaks, like a break from schoolwork or a loud cafeteria.

“It’s really just generalizing that same skill that we’ve already been teaching, but applying it to the masks,” Leonard said.

There are mask break areas set up in Big Spring classrooms where students can safely sit if they need a respite from wearing their mask.

Scheurich said the Derry Twp. district spread tips and information for families to teach their students how to wear masks over the summer. For students with sensory impairments, mask-wearing can be more difficult to teach, so there was additional information made for them.

Overall, kids are doing a great job, Scheurich said. For students that may be defiant or reject masks, she said the district is committed to working with them on a case-by-case basis.

“We’re definitely not going to go to immediately to ‘nope, sorry you have to go virtual if you can’t wear a mask,’ — that’s a last resort,” she said.

They have dedicated rooms where students can go if they aren’t wearing a mask to keep everyone safe while they work out a solution.

In some cases, online learning is beneficial

“There are some students who actually are having less behavior issues because they’re not in school and they don’t have to interact with their peers because that’s a trigger,” Turner said. “Some students are loving and benefiting from online education.”

Anne Couldridge, Executive Director of CPARC, said when her autistic son had to do virtual learning last spring, she and her husband were concerned about how they were going to make it work.

“My son exceeded some of the goals on his IEP during that virtual learning — to the point I got my husband a t-shirt that said ‘Homeschool Teacher of the Year,’” Couldridge said. “There’s so much negativity, the message of hope is for families to try something new, even if you don’t think it’s going to work.”

Turner said this is a tough year for all students, and that there’s a good chance some students will fall behind a little. “Students are resilient, and I do think eventually they’ll get back to where they were,” Turner said.

Kelly, whose son is in the Derry School District, said online school last March went better than she expected it to.

“The therapist worked with the teacher … to come up with activities that we could do at home and stuff like that. So it went about as well as it could,” Kelly said. “We’ve been really pleased with Derry Township School District, our teachers are wonderful.”

Teachers in the Derry Township School District, as well as others, were given hours of professional development training over the summer, some mandatory and others voluntary.

“They received a ton of targeted professional development around this topic, but then on top of that we also gave them time to work together collaboratively,” Scheurich said.

Teachers will receive ongoing professional development as the year progresses, she said.

“It’s hard and it’s not ideal what we’re going through, but we are surviving, and in some ways even thriving a little bit,” Scheurich said. “That’s a positive I hope people take away.”