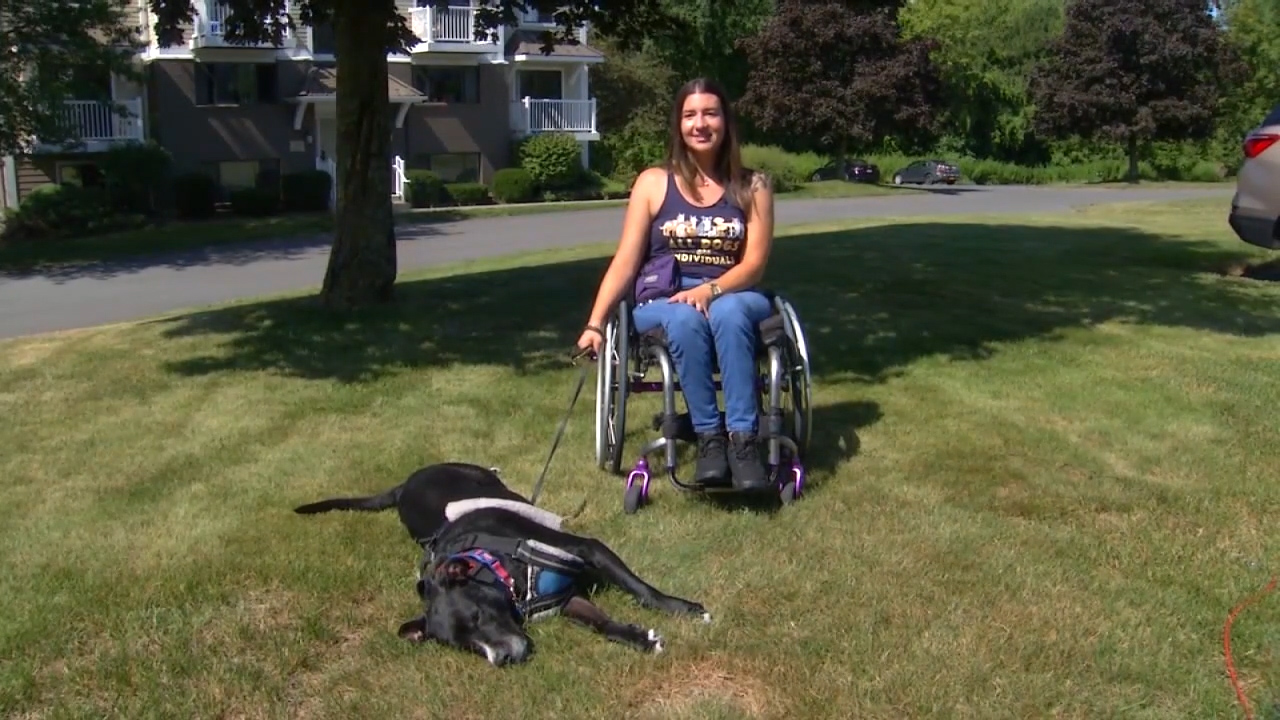 (NEWS10) — Animals can have a big impact on our lives. They are our companions, but they can also open up doors in our lives and the world around us. NEWS10’s Anya Tucker shares the story of Amy and Ziggy who are doing exactly that for one another.

Anya: “Do you feel like maybe this was meant to be? That you really saved one another?”
Amy Koo: “I do. I definitely think so. “

To understand what Amy Koo means we have to go back to 2007. She was 16, and on an August night of that year, she climbed into a car with friends and everything ended in a crush of metal.

“You know, I lost a friend in that car also. So it allowed me to be grateful for the things I do have.”

Ziggy, the dog, also knew something about being grateful. The Pitbull lab mix had been down on his luck living in a shelter.

He now has a new “leash” on life thanks to some wonderfully dedicated folks with the Animal Farm Foundation in Dutchess County. Part of their mission is to transform former shelter dogs into service dogs for people with disabilities.

“Traditionally, service dogs are pure breed dogs and they go through a very rigorous program that is very expensive and makes it difficult for folks to purchase a service dog. Well, we wanted to turn that model on its head and not only use shelter dogs, but dogs labeled Pitbulls, which people still discriminate against,” said Stacey Coleman, executive director of Animal Farm Foundation.

Their work towards positive change extends to correctional facilities where inmate volunteers can sign up to train the dogs.

So Ziggy was sent once again behind bars but this time with a purpose. When he got his doggie degree from Rikers Island, he was paired up with Amy. All costs for their training covered by Animal Farm Foundation, which relies on donations.

“I think that the match they found for us is perfect,” said Amy.

Especially considering her job, working as an educator with incarcerated juveniles.

“Because he’s already familiar with radio sounds, the large gates you need to go through.”

As a larger mixed breed, Ziggy has the strength to help Amy pass through those gates at work as well as opening and closing doors at their home in Rensselaer County.

He knows how to retrieve her medications as well. What’s most important is that Ziggy has also opened up the world to Amy. During their two years together, they’ve traveled extensively.

“It’s kind of is like wow, I’m still capable of anything. And now when I travel with Ziggy it’s like bringing my child with me. It’s like ‘Come Ziggy, come on these adventures with me.’”

And they both know they have a constant companion wherever they roam.