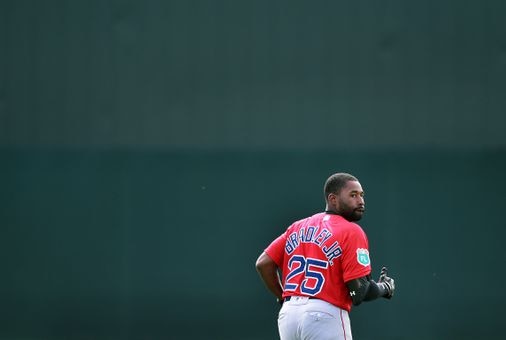 Despite gray skies and potential rain, Bradley had a lot to soak in just a day after his season ended. He sat down with the Globe and traced how he’s gotten to this point and discussed his free agency ahead.

The Red Sox are all Bradley’s ever known. It was the organization that drafted him in the first round out of the University of South Carolina in 2011, that saw him steamroll through the minors, set spring training on fire in ’13, and earn an Opening Day roster spot only to see him fall flat. It was the team that saw him struggle, then succeed, then struggle some more. Then succeed some more. Then struggle again.

Nine years later, Bradley is entering free agency. It’s a moment that, depending upon who you ask, many suspected he wouldn’t reach, at least with the Red Sox. This was a feat.

Bradley calls this the final stage, or close to it. His last goal is to get to 10 years in the big leagues, which will allow him the maximum Major League Baseball pension once he retires.

“It’s just a special, special achievement because it’s such a hard thing to do,” he said, between bites of that French toast, eggs, bacon, and those potatoes (of which he sent Erin a picture). “Yeah. And, you know, there’s, there’s a lot of things in between that, you know, help you get there.”

A number of those people who helped him showed up on his phone that morning. There was a text from Fred Lynn, congratulating Bradley with a picture of the pair posing with Bradley’s 2018 Gold Glove. Dustin Pedroia texted as well, calling Bradley the ultimate professional who battled through the ups and downs. And, of course, there was the FaceTime call from his Erin and their daughter, Emerson, showing off the latter’s skills on the harmonica.

This was part of the village that helped keep Bradley going when the times were both tough and good. Particularly in 2014.

Despite being on the big-league club due to a Shane Victorino injury, Bradley kept his apartment in Pawtucket near the Sox’ Triple A affiliate just in case he got sent back down. (He spent all but two and a half weeks in late summer with Boston.) Bradley, in a season where he hit just .198, would make the hour drive to Fenway each day alongside Erin.

“Erin and I would just sit in the car in just complete and utter silence,” Bradley said. “I was just completely baffled or angered by the way I had performed. It weighed on me heavy.”

In a way, this is his victory lap. He emerged from his darkest hours as a Gold Glover, All-Star, ALCS MVP, and World Series champion. Now, a free agent. A polarizing figure in Boston who received his fair share of criticism throughout his tenure.

“You know, as much crap as I got from the people, the fans or whoever it may be,” Bradley explained, “what they could possibly say to me wouldn’t affect me more than how I felt — what I knew I was capable of doing. In a way, I never forgot it. I never forgot it. You will always remember the things that were said to you. The things that were brought up. But, you know, but how do you use that? How do you go about it? How do you learn from that?”

Bradley turned his chair toward the street. In a sense, admiring the road that he’s traveled and what he’s built. The playground across the street from Thornton’s is where he used to take Emerson. The Bradley family will grow soon; Erin is due next month with their second child, Jackie Bradley III.

Bradley, too, has grown, and remained authentically himself. He’s frugal, driving the same white Cadillac CTS-V he bought when he was drafted. It has roughly 99,000 miles on it — miles of doubt, miles of happiness.

“You know, a lot of people like to say they’re proving people wrong or their critics wrong,” Bradley said. “I come from the mold where I like to prove to the people that support me, that love me, my family. I like to prove them right.”

Bradley’s mostly been getting around on foot the last two weeks or so. He shipped off his car, and the scooter he rode every day to Fenway. It’s provided him a different way to soak up the city he’s called home. The relationship he’s cultivated in the organization, and outside of it.

There’s no telling where Bradley might end up next season. Even in a pandemic-plagued year, he’s excited to go through this free-agent process. There are scenarios he must weigh, like how valuable he could be in another ballpark besides Fenway, where his fielding capabilities are limited due to the dimensions. Imagine if he had even more room to run?

“I would love to see Jackie play center field in a big outfield like Colorado,” former teammate David Price said during a phone conversation. “Where you can get to see him run around and get to see him be reckless in the outfield. I always just enjoyed it when we went on the road, just because being able to watch our outfield play the outfield in a different park.”

Around 2 p.m., it began to drizzle, prompting Bradley to pull out his phone and check the radar. He glanced up toward the Boston sky before looking back down.

He had soaked in enough.

Read more: Jackie Bradley Jr. is the only Black player on the Red Sox. His mom knows that feeling