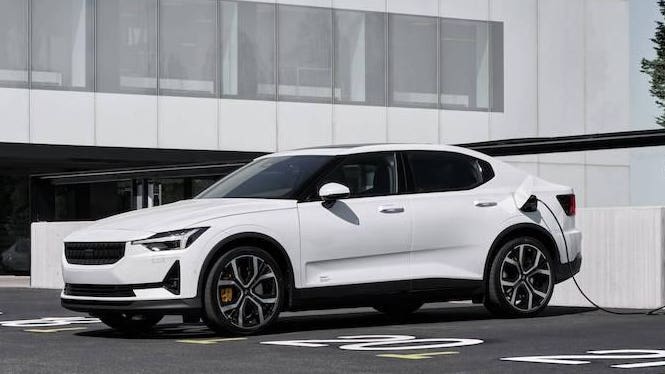 A pristine white Polestar 2 arrives at my home and I am a little nervous. Distracted, I pay little attention to the delivery driver’s thorough explanation of the car’s technicalities, which I regret when it comes to charging the battery on my final test day. The problem is, the Polestar 2 has a great deal to live up to – ironically high hopes placed on the car by me. Having written positively on this new brand, interviewed the CEO and then the creative director, talked passionately about its design and liaised with a group of innovators making the novel vegan material featured inside, I am terrified that driving the Polestar 2, the real-time experience, may not match my great expectations.

Polestar was announced three years ago as a new company focused entirely on making cutting-edge, highly technical electric cars. The products benefit from the expertise offered by its parent company, the Volvo and Geely Auto Group. Yet, Polestar has its own mission in (what the company likes to see as) being the “guiding star” – pioneering ideas for the rest of the group. So, everything has been meticulously considered to be sustainable, right down to the low carbon footprint plant in Chengdu, China.

Visually, Polestar follows a strict regime of minimalist aesthetics – clean lines and clear surfaces, as well as a neutral color palette. Customers are not given free creative choices either – rather they pick and mix from a tight menu. The strict styling extends to the Polestar Cube global headquarters in Gothenburg, Sweden. It may all sound a little too controlling, but the primary theme is to ensure the products follow a strict code and portray the message of unpolluted, cutting-edge transport.

First came the pinnacle Polestar 1 – a plus-$182,000, limited-edition grand touring coupé with 600hp electric performance, which I got to experience as a prototype. This volume model Polestar 2, though, is the car the company has high hopes for since it is a Tesla Model 3 competitor and priced reasonably around €40,000 ($46,000).

I hop onboard my Polestar 2 test car and head to west London to pick up my mother and run her errands, which is usually a great way to explore all practical aspects of a test car. Electric vehicles give linear acceleration and the Polestar 2 offers a pleasing commute. Performance is at the heart of this brand with the all-wheel drive electric powertrain has 408 horsepower and 660 Nm (487 lb-ft), with 62mph possible in under five seconds and with the car maxing at 127mph.

Mirroring the exterior design, the inside is clean and clear and uncluttered. It helps elevate a sense of calm – not a bad thing in pandemic times and certainly a welcome sanctuary in London’s traffic. Everything inside is covered in shades of white and black, bar Polestar’s signature bold orange/gold seat belts which somehow remind me of the red braces favored by the fictional character Gordon Gekko in the 1987 movie Wall Street, which I’m guessing is not the impact intended. That aside, this is a thoroughly likeable space to inhabit as I intuitively sync my iPhone and adjust to the car’s settings in a matter of minutes. The clear frameless side mirrors are elegant and provide great rear visibility and I take advantage of the top-down camera view which makes city parking an absolute breeze.

I’m keen to see what my parents make of such a high-tech car with no real heritage or familiarity. They seem positively inquisitive and are impressed with the vegan interior, while my mother likens the car to her iPhone. There is hardly any visible Polestar branding on the exterior of this car other the main logo and what appear to be small stick-on badges on the sides indicating that this is an electric car. There is some curiosity from other road users but not as much as I had hoped. However, driving past a Lamborghini and Ferrari showroom on the final test day, we are positively surprised to see a couple of young car geeks take their camera lens temporarily away from the supercars and snap the Polestar 2.

The following day my husband and I take the car through central London and are a touch smug to know that we are exempt from paying the mandatory seven-day-a-week congestion charge since this is an all-electric car. Then on our final day, we experience mild anxiety as we watch the battery power rapidly deplete and cannot locate a single free charging point. When we finally find one, I deeply regret not having paid attention to the delivery driver’s instructions. In theory though, charging should be relatively easy, estimated to reach full capacity in around 10 hours on a 11kW wallbox, which is reduced to around half an hour from 10 to 80% at a fast-charging station.

The Polestar 2 is meticulously thought out – every touch point, every little element has been designed to deliver the overall message that this is a progressive car. And it is hard to aesthetically fault it either. I feel proud driving this car around London, yet no matter how hard I try, there is little emotional connection. Apple had me (and a big chunk of the consumer electronic world) hooked on that very first iPhone. Can Polestar do the same?

I admire what Polestar stands for, its values and its promise. I like that it doesn’t imitate heritage brands but rather looks to the world of Apple and electronic gadgets for how it positions itself. Much like how Elon Musk envisaged Tesla as a big idea with a clear vision, this new brand is also painting the full picture: from the production facility to the cars, the infrastructure and sales network.

Speaking with Polestar’s chief executive officer Thomas Ingenlath, who is personally invested in every minute detail of Polestar, he said of the marque, “everything about it has been designed and engineered with passion and dedication. As an electric performance brand, and through the forthcoming launch of a portfolio of fully electric cars, Polestar is determined to address the world’s air quality challenges.”