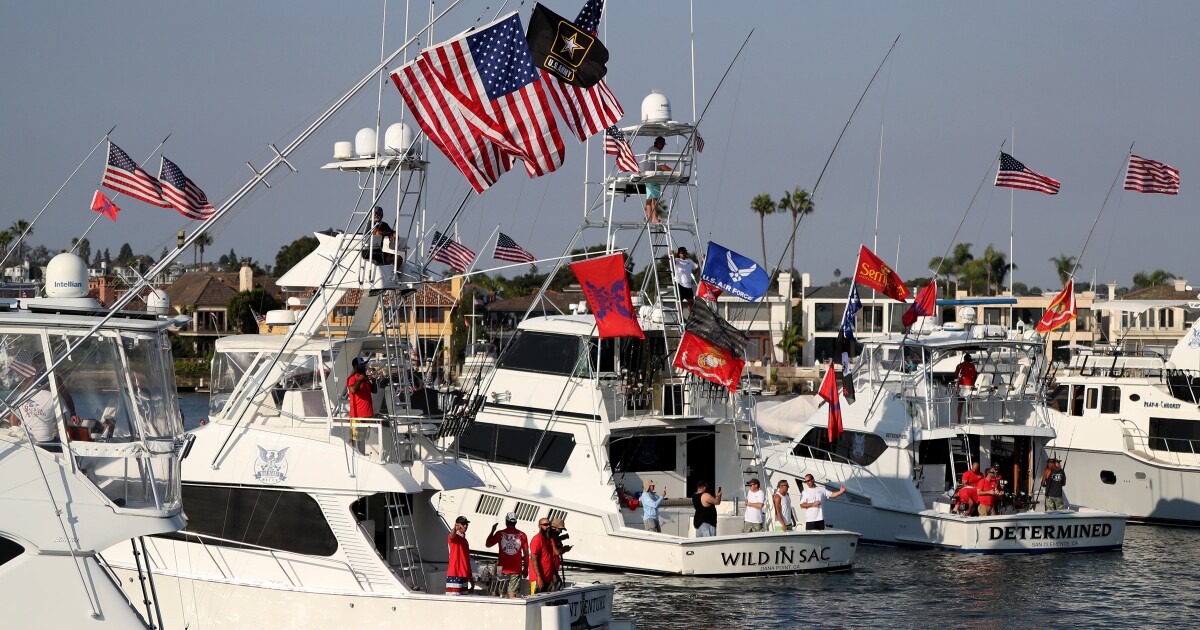 Win or cruise for 30 veterans this weekend, the War Heroes on Water third annual fishing tournament is underway as 12 boats sailed out of Newport Harbor following a boat parade Thursday.

The boat parade, which began at the Newport Harbor turning basin at around 4 p.m., kicked off a weekend-long fishing tournament that will end with a military flyover Saturday evening to honor the participating veterans. Veterans come from parts of Southern California in light of travel concerns due to the COVID-19 pandemic.

This is the first year that the tournament has a boat parade, said tournament director Rod Halperin.

“Typically what we would do on the first night, we have a big fundraising party at [Hsieh’s] home and we would have three or 400 people there, a silent auction. Everybody would get together and the community would be part of the event,” Halperin said. “We can’t have a big gathering like that, so what can we do to get the community involved? ‘Well, we’ll have a boat parade.’”

The parade included a national anthem salute and Halperin said that organizers wanted a way for the community to participate, whether sailing along in the boat parade with their boats or watching from their porches, and support the veterans.

The War Heroes on Water tournament began in 2018 when loanDepot founder and chief executive officer Anthony Hseih decided to organize a tournament after taking seven veterans on a fishing trip to Cabo San Lucas, inspired by what veterans said about how much the time spent on the water meant to them.

Halperin said that organization for this year’s tournament began immediately after the 2019 tournament, but that they decided to pivot in March to shrink the event down in favor of a reunion tournament, which includes returning veterans and yachts.

Organizers initially planned for 30 boats and 100 veterans to participate in the 2020 tournament, which was also planned for August but was delayed to October for safety concerns.

“The last thing we wanted to do, because we’d already planned it, is call these guys and say, ‘Hey. We’re going to pull out one more rug from under you.’ We just weren’t going to allow that to happen,” Halperin said, adding that the team’s taken an “abundance” of precaution in organizing the event.

Carrillo, who also oversees safety protocols, said that veterans were tested twice for COVID-19 — once the week before the tournament and, again, the day of the start of the tournament. Participants are isolated to their hotel rooms until it was start time Thursday afternoon, wherein veterans were then taken to Hseih’s home and leave on their respective yachts. Crew members were also tested.

“When we say, ‘War Heroes on Water,’ the ‘on water’ part is real. They’re going to get on the boat here Thursday afternoon? They’re not getting off the boat until Sunday. They’re living on that boat with them,” Halperin said. “Everybody on the boat’s passed COVID [tests] twice and they’re staying on the boat.”

When participants return Sunday, they’ll be taken back to the hotel until the awards dinner, which will be spread outdoors with the exception of those that were on the same yachts together.

Freedom Alliance director of programming Josh Miles said that the organization received a “ton” of interest in the tournament. He said it wasn’t difficult to convince returning participants to come.

“It’s such a good experience and that’s a testament to all the War Heroes on Water folks and the experience the guys get,” said Miles, who is also a Marine Corps veteran. “It’s unlike anything I’ve ever been a part of. We do a lot of different events throughout the year. Freedom Alliance, rehabilitative retreats and things of that nature, but this is something unlike anything else.”

Mike Nares, an army veteran and program officer for the Freedom Alliance, said that he felt the camaraderie on the yachts between veterans was an appeal. Miles added that he felt what made the tournament unique was the bond that it made between the civilian community and the veterans participating.

Miles said that he saw veterans and civilian crewmembers was like a little “brotherhood,” adding that people contact boat owners and captains that they’ve met or other people that they’ve met as a result of the tournament to go to lunch.

“Being with your brothers in arms again. We all get away from that because we’re civilians again. We don’t have that and when we all get together, it’s like being back in the service,” Nares said.

“They reach out to each other and they feed off of each other,” Miles said. “Though we’re healing from different kinds of wounds, everybody’s got something going on and we can all get together and heal together — civilian and military. It’s really cool.”

Support our coverage by becoming a digital subscriber.